There are so many cute back-to-school photos on Facebook today! I enjoy seeing them all, and time really does fly.

For example, it seems like just yesterday that Dr. Susie Meade took the lead as the Superintendent of Winterset Schools, but this is the start of her fifth year serving the district. I’m not sure you can really call it “back-to-school” in her case, though, because I know she worked most of the summer. I saw her at several gatherings on summer days and evenings, reaching out to the community to share the current financial status of our schools, predictions for future growth, and the basis of the upcoming vote on September 13th.

“It’s a pleasure to be the superintendent in this school district,” Dr. Meade told the Rotary Club. “We have wonderful people, and great teachers, and folks that really want to do the very best thing for kids. It’s great to work with an organization like that.”

Every spring for the last few years, the school has issued an update on their financial situation. The charts and graphs included here are from that update, and they tell a good story. Of the four main goals that exist to make sure they have the right support in place for our students to be competitive with other students throughout Iowa and the nation, all are on target, and the indicators of enrollment, solvency, revenue and expenditures, and salaries and benefits are within the desired ranges. 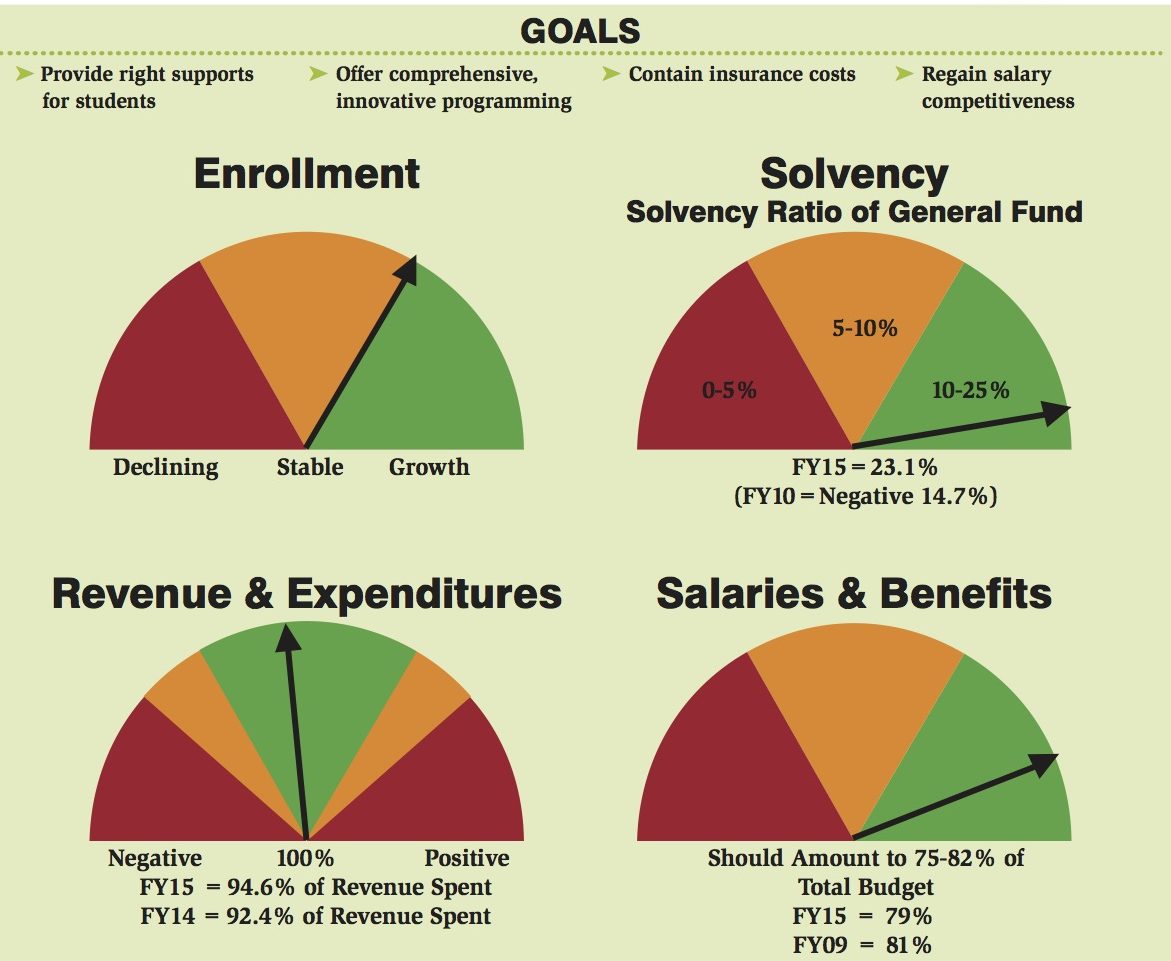 We are in a good financial situation in Winterset, and this is why: 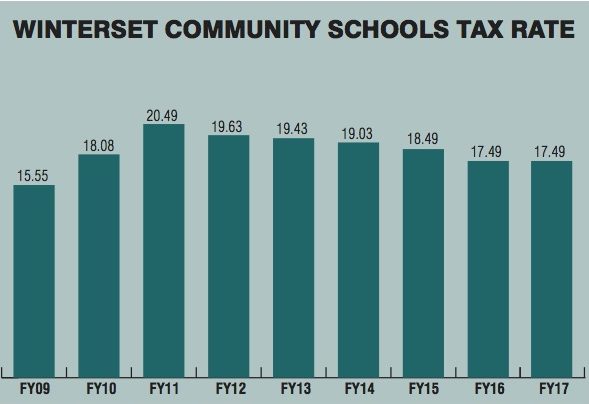 The fact that the school tax rate has gone down by $3.00 is huge. “Unfortunately, I never get thank-you notes about that!” Dr. Meade said with a laugh. But of course, she does hear about it when there’s a rumor of taxes going up. Also, she hears a lot of misinformation in the community. Many people are under the impression that the school taxes in our area are among the highest around, but this is not true. In comparison to the rest of the Raccoon River Conference, we are second from the lowest. (We can’t compete with Carroll because of the large amount of industry they have there.) 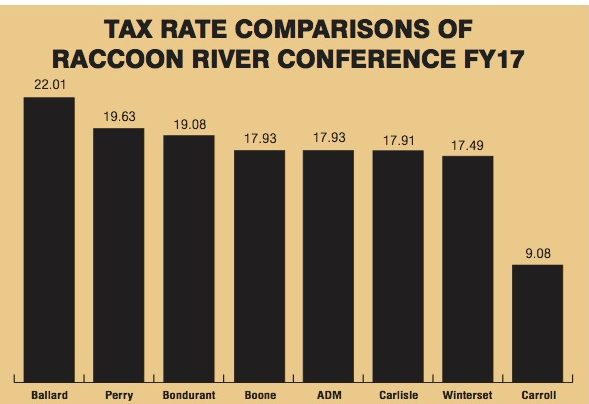 What’s the September 13th vote about?

You may remember that about two years ago, the district went to the community and asked voters for permission to reallocate their existing funds in such a way that they would be able to take care of some major physical projects without raising taxes. That successful YES vote went exactly as promised, and has resulted in improvements (such as the current roofing project going on at the junior high and high school) with no tax increase.

In essence, this is a similar request. Basically, they’d like to have the ability to pay off their debt at a rate of $4.05 (per $1,000 of taxable valuation) instead of the $3.20 they’re currently capped at, utilizing the funds they already have. This means no tax increase. The vote is simply to increase the cap from $3.20, which was set in 1992, to $4.05 for debt service.

If the district continued to pay off the bonds that were used to build the new middle school at the rate they agreed to at the time, they’d be done in 2029. However, since their financial status has improved in the last couple of years and allowed them the ability to do so, they have started paying off the debt at the previously approved rate of $3.20. Paying off the bonds at $3.20 is good, and it will allow the district to eliminate the debt six years faster with a savings of $1,137,978. However, $4.05 would be even better, resulting in $1.3 million in savings, possibly as early as 2022. $4.05 is the highest rate allowed in Iowa, and is the rate allowed by all of the other Raccoon River schools.

Also, it is important to note that this just gives them the ability to pay at the $4.05 while they can. Currently, the cash reserve is built up to the point where they almost can’t build it anymore, and the management fund is built up as well. If that were to change and they found the $4.05 rate to be a struggle, they could always return to the $3.20 rate or lower. 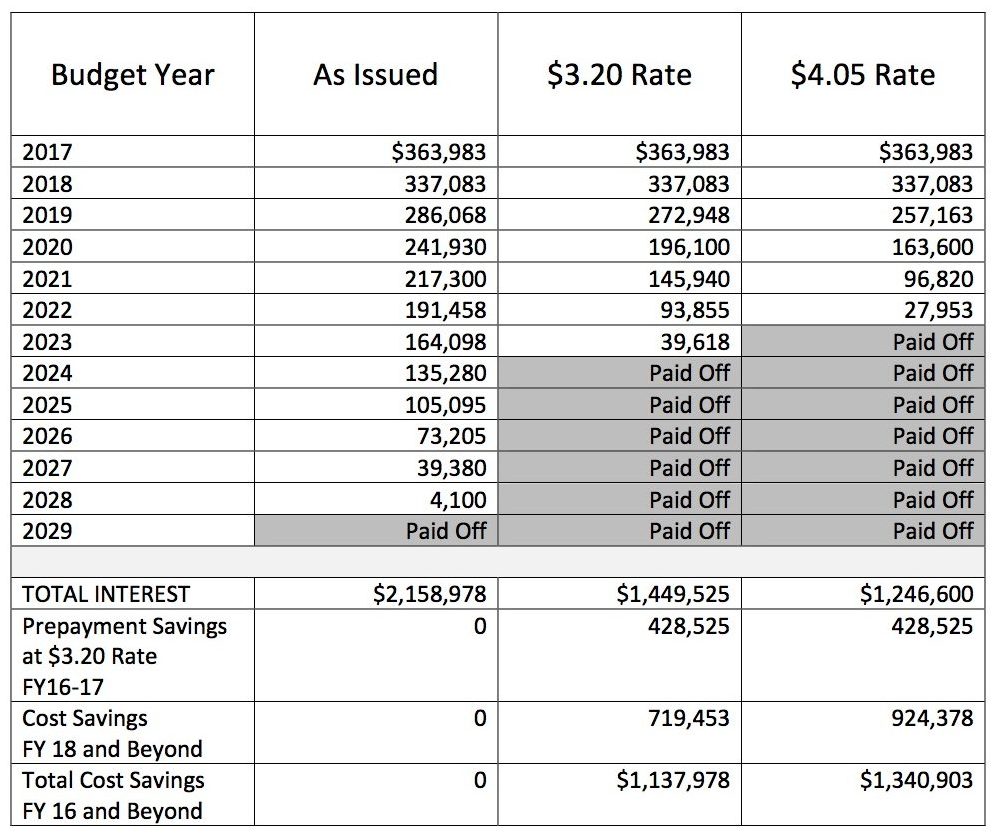 Why is this vote important?

A YES vote to increase the debt service levy will not increase school taxes. What it will do is put Winterset in the best possible position to deal with impending growth in the next five to ten years due to expansion in the northeast corridor.

Because of Microsoft’s building plans and the additions to infrastructure that will happen in the county, we are likely to see some large bumps in enrollment within the next five to ten years. In fact, some have estimated up to 5,000 kids eventually residing in that area. “There will be some difficult decisions to make about how to maintain our identity and yet take care of the kids that are in that corridor of our district,” Dr. Meade said. “So we’re trying to do some things to position ourselves so that we’ll have the ability to make those decisions that are best for our district, as well as what’s best for students.”

School finance is a difficult subject, and the district can’t control all aspects of it, such as what the state and federal governments decide. As challenging as it is, however, Winterset is creating the best possible situation given what they have and what they know. They are also lucky to have Dr. Meade in her current position, since she has had experience working with the Ankeny school district during a time of major growth. “We think it’s going to be a win-win,” she said. “I can’t tell you how to vote, but I can tell you we need 60% of the people to say this is ok for it to pass, and it will help us to be ready for whatever is coming in the northeast corridor. We would like to face those difficult decisions without a lot of debt on our books so that we can make the best possible plan.”

Voting day is September 13th. Absentee voting is now open at the Madison County Courthouse and can be accessed Monday through Friday, 8:00 am to 4:30 pm. You can also call to request that a ballot be mailed to you: 515.462.3914.