By now you’ve likely heard this exciting news, but I’m going to share it anyway. Five Iowa Great Places have been awarded $1.3 million in grants for projects in their communities, and one of those five is the Madison County Cedar Bridge Rebuilding Project, receiving $275,770. When added to the funds already raised in the community, this amount will allow rebuilding efforts to begin in earnest, in hopes of having the reconstructed bridge (full size and drivable) ready to be rededicated around the time of the 2019 Covered Bridge Festival — the 50th Annual. Full details about the grant and other award winners can be found here. Kudos to the chief grant writers Heather Riley and Brenda Hollingsworth, as well as the Rebuild Cedar Bridge committee, on this great accomplishment for our community! Credit for the beautiful photo below goes to the amazingly talented Carol Bassett of Luminosity Design. 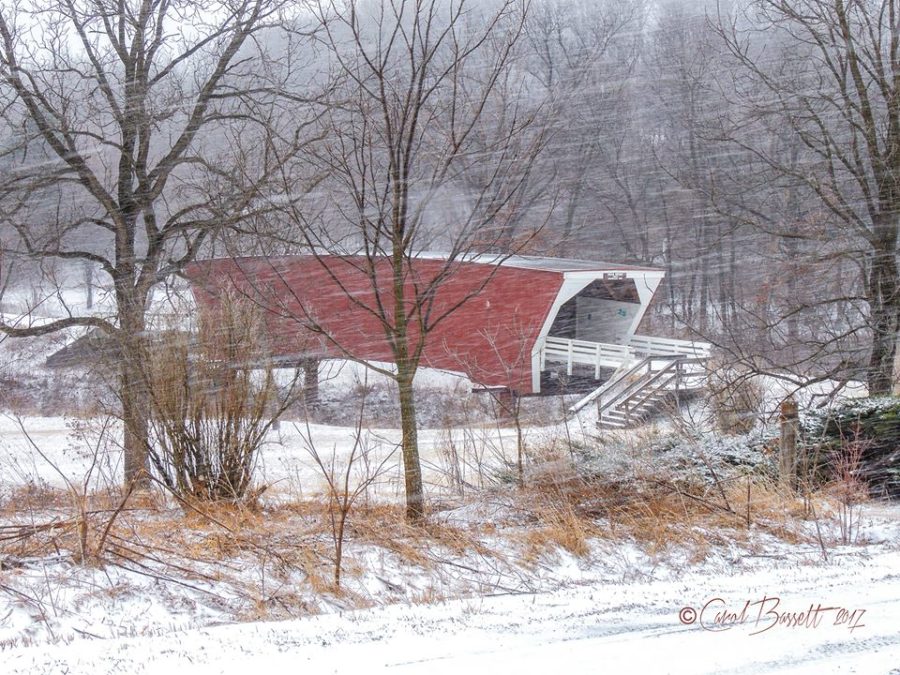 You may remember that the LaFollette home at 1145 W. Summit provided the setting for a live nativity scene for many years at Christmas time, hosted by the First United Methodist Church of Winterset. I think the late Robert and Lynn LaFollette would be so pleased that the tradition is living on with the home’s new owners, Mark and Kayla Hawkins. Now known as the Judge Lewis House (named after a historic former occupant), visitors are encouraged to follow the star TONIGHT (Thursday, December 21st) to 1145 W. Summit to see the newborn baby Jesus. The scene is open from 5:00 to 7:00 pm. You’ll be greeted by the innkeeper, escorted by the shepherds and serenaded by the angels as you celebrate the birth of the King. The holy family was played by Ashley and Garrett Guilliams and their twins on Wednesday evening, and will be played by Brandon and Emily Douglas and Madison this evening from 5:00 to 6:00, and by Brady and Becca Pugh and Nathanael from 6:00 to 7:00. 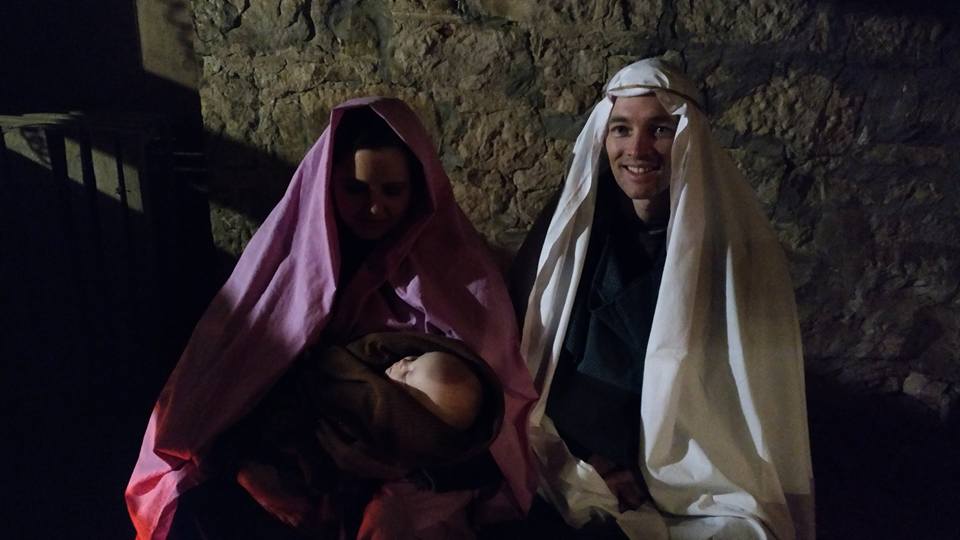 A special “Men’s Only” shopping event is planned for this evening, December 21 from 5:00-7:00 pm on the Winterset square. Some of the participating merchants include Pine Creek, Ltd., Angel Wings & CT, Piece Works Quilt Shop, Village Bootery, Madison County Mercantile, John Wayne Drive Trading Company, Ben Franklin, b. shannon designs, 1st Avenue Collective, and Montross Pharmacy Gift Shop. Each will have men’s only specials, and there will also be snacks! At Angel Wings & CT, for example, there is a gift card promotion for those two hours only. Men can buy a $50 gift card and receive a free $15 gift card. Gift wrap is included, and they’ll send you away with a cup of caramel popcorn. 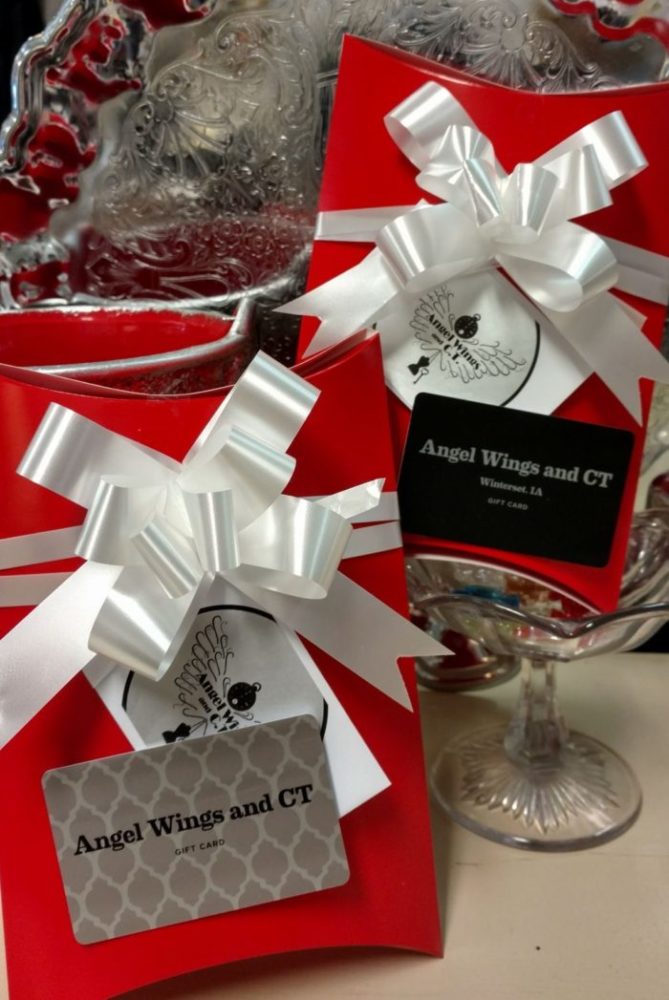 Sarah Zahn, who provided headline entertainment at the 2017 Covered Bridge Festival, will be returning to Winterset with her uncle Paul Borg to perform A Holiday Concert on stage at The Iowa Theater Friday evening, December 22nd at 7:00 pm. The Iowa Theater will also be featuring White Christmas this weekend, and the new family favorite Coco will open there on December 28th. 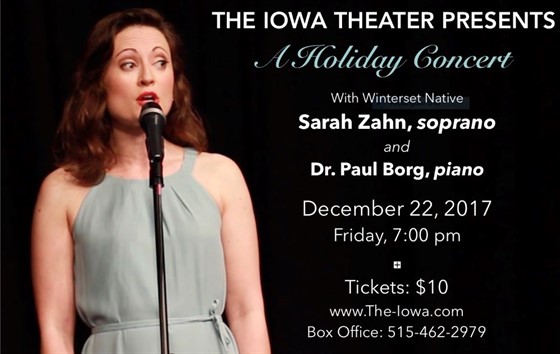 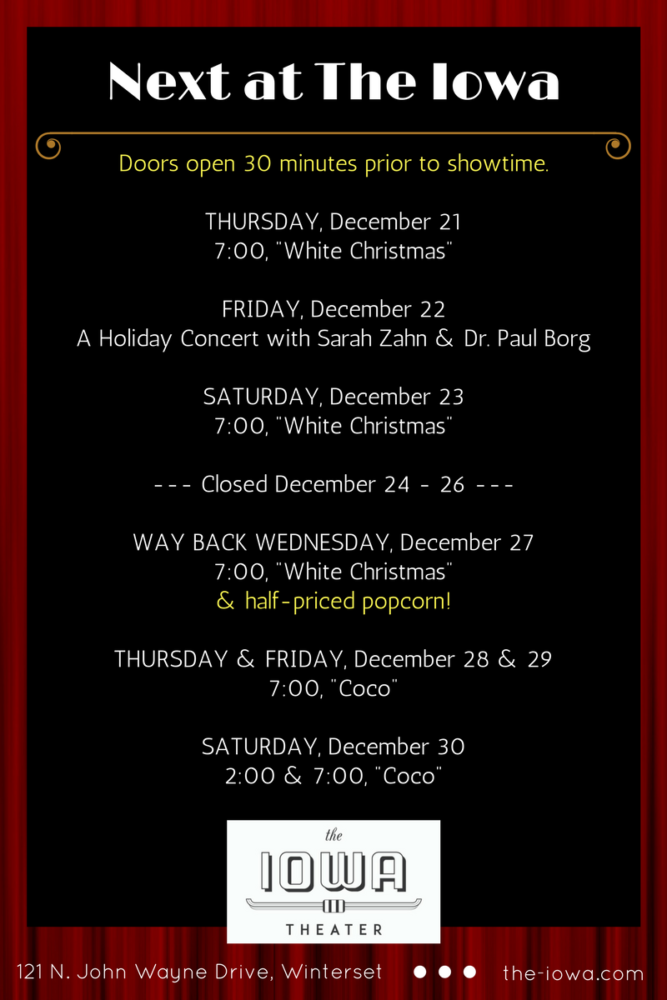 Big Rack Brew Haus, brewing a popular selection of hand-crafted beers at 2475 Hiatt Apple Trail (just past The Pumpkin Ranch), is hosting a Holiday Bonanza with food, drinks and live music by Dave Grey on December 23rd. Doors open at 1:00 pm, and the event will run until 11:00 pm. 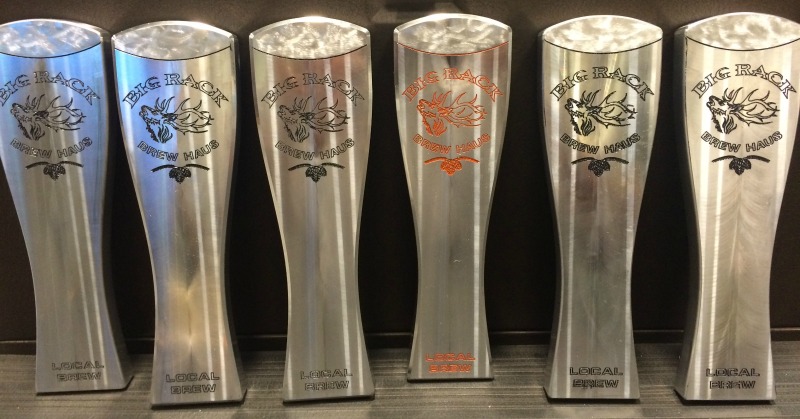 Re:home will be open one more time in 2017, on Saturday, December 23rd from 9:00 to 2:00. They’ll have 25% off Christmas decor — wreaths, garlands, floral, ornaments, signs and more. Sale excludes stationary and Jeff Tadsen artwork. Gift certificates available too! Mark your calendars now for their open dates in January through March.

The Winterset Library is offering a great lineup of activities for kids who are home during the winter break from school, starting on December 26th with a family movie at 1:30 pm. To see details of each event, visit them on Facebook. Here are a couple of my favorites: 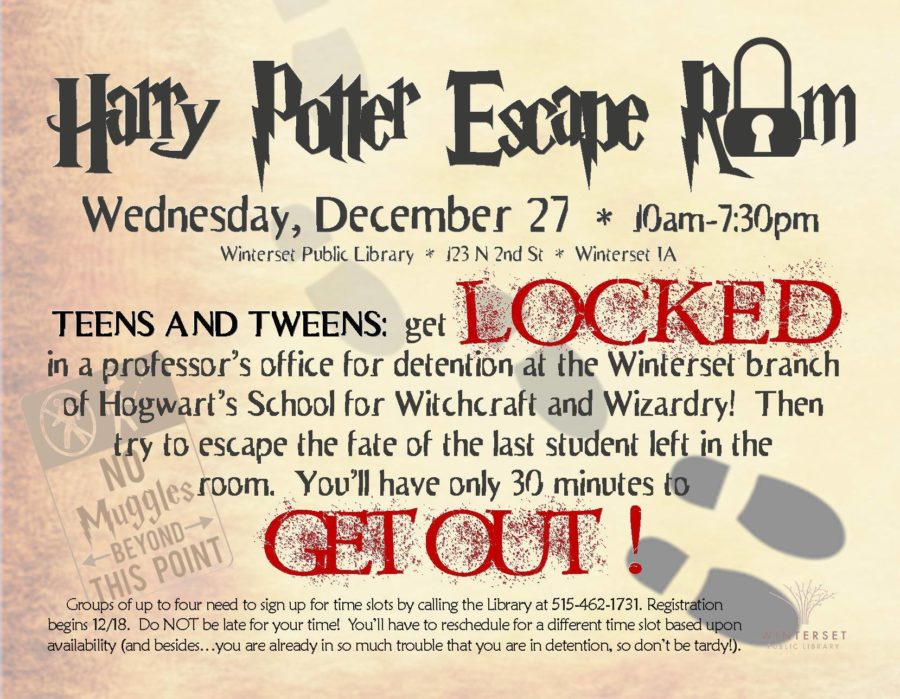 Heartland Fiber Co. is also offering some classes for kids during Christmas break. For more information or to register, call 515-468-8593. 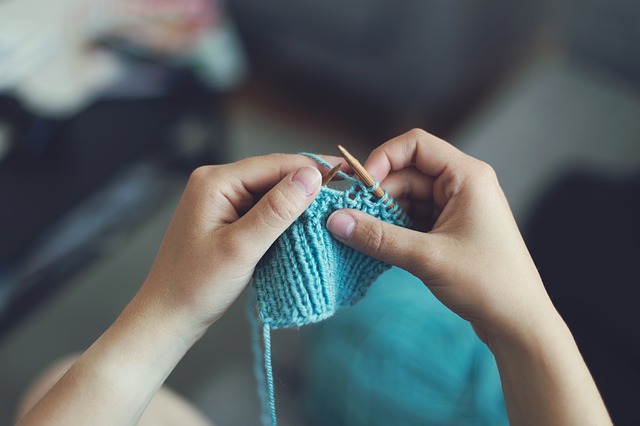 If the weather cooperates, the Winterset Park & Recreation Department will hold a Snowman Building Contest on Saturday, December 30th from 1:00 to 3:00 in the open field south of the city tennis courts. Hot cocoa will be provided. Register by December 22nd. Also, the walls of the ice rink have been installed, and the liner will be installed the day after Christmas. If the cold weather comes as predicted, the rink will open on Saturday, December 30th. Watch the Winterset Park & Recreation Department Facebook page for up to date information. 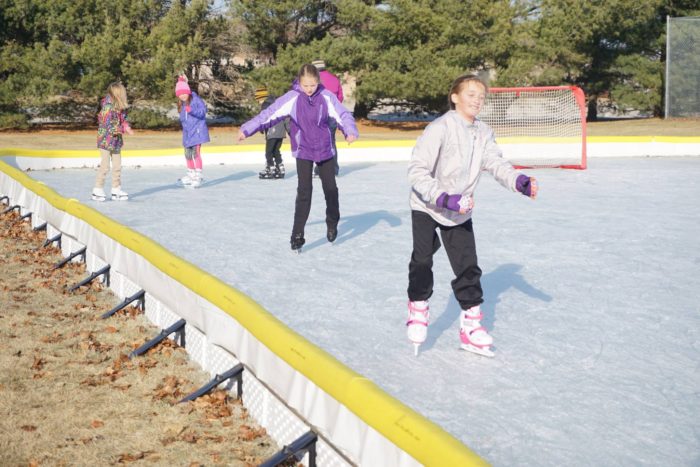 The Winterset Stage is offering a Children’s Theater Workshop starting on January 6th for students in Pre-K through sixth grade. The class will meet on Saturdays through February 24th, and end with a performance. Pre-K through 1st grade will meet from 8:30 to 9:00 am, and 2nd to sixth grade will meet from 9:15 to 10:30 am. Tuition is $75 for the younger kids and $150 for the older group. Classes will be held on stage at The Iowa Theater. A limited number of scholarships are available thanks to the Winterset Kiwanis Club. Register by January 3rd at info@thewintersetstage.org. The Winterset Stage will also begin auditions for its next production, Baskerville, on January 7th. 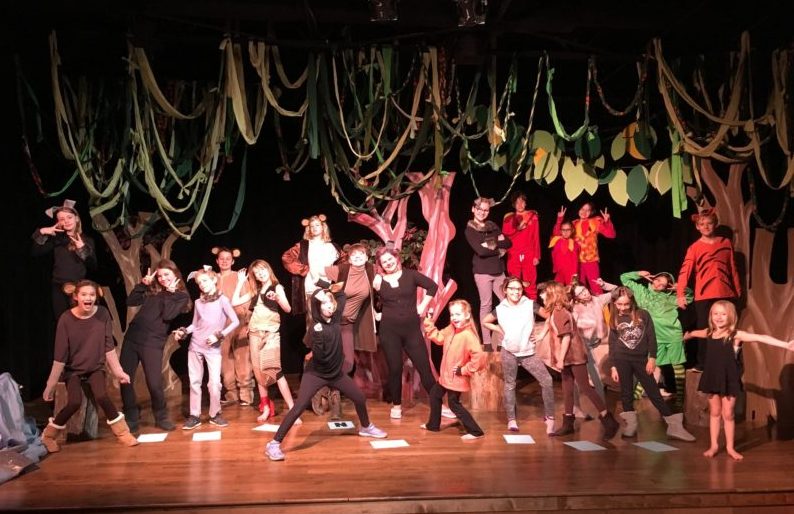 The Iowa Quilt Museum will have a new exhibit on display from January 3rd – April 15th, 2018. “Feed Sacks: The Colorful History of a Frugal Fabric.” Feed sacks, flour sacks, seed sacks — cotton bags of all sorts — provided the raw material for quilts both past and present. In addition to quilts, this exhibition tells the story of feed sacks through advertisements, ephemera, and the sacks themselves. Artist-bound copies of Feed Sacks: The Colourful History of a Frugal Fabric comprise an additional exhibition element. 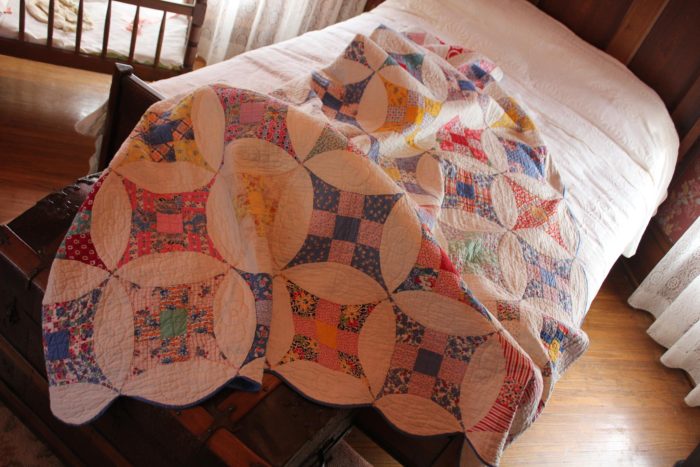 Here’s a dynamic author and program coming to the Winterset Library on January 2nd: Dallas County Rebels: How a Posse, a President, and the KKK Changed American History. “No Iowa county has influenced American history more than Dallas County. Discover why during a dynamic new program by Iowa author and former Dallas County resident Darcy Dougherty Maulsby during her free program and book signing on Tuesday, January 2, 2018, at 6:30 p.m. at the Winterset Public Library. Dallas County helped propelled Harry Truman to an unlikely victory in the 1948 presidential campaign, following a fiery speech he delivered to 100,000 farmers on a sweltering September day at the National Plowing Match near Dexter. Just 15 years earlier, a shoot-out near an abandoned amusement park known as Dexfield Park marked the beginning of the end for infamous outlaws Bonnie and Clyde and the notorious Barrow Gang. Even before that, Dallas County was home to people who weren’t afraid to challenge the status quo, from KKK members in Perry to conductors on the Underground Railroad in southern Dallas County. During her program the Winterset Public Library, Maulsby will also share stories of some of Dallas County’s most famous residents. The county has produced several major-league baseball players (among them Bob Feller and Hal Manders), and University of Iowa football legend Nile Kinnick, the 1939 Heisman Trophy winner whose grandfather George Clarke, of Adel, served as Iowa’s governor from 1913 to 1917.

Today, Dallas County is one of the fastest-growing counties in America and remains a region of opportunity with a rich heritage of small-town living, farming, coal mining, and the immigrant experience. Explore the stories, from the celebrities to the rebels of Dallas County, who played an unforgettable role in American history, right here close to home.” 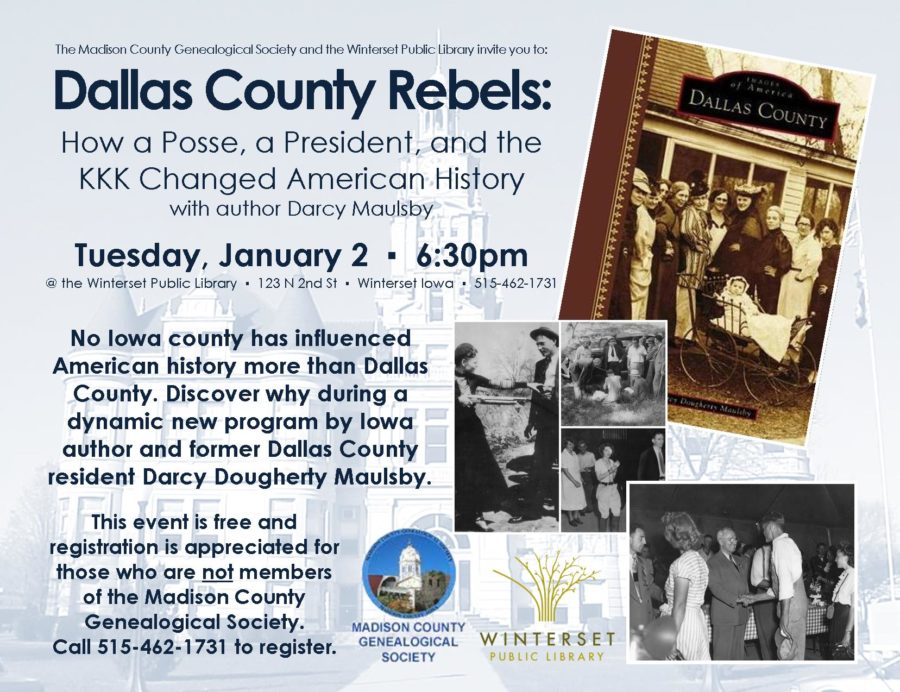 If you haven’t had a chance to visit the dressed up Bevington Kaser mansion on the grounds of the Madison County Historical museum, or drive through the museum grounds at night to see the lights, I highly recommend both! 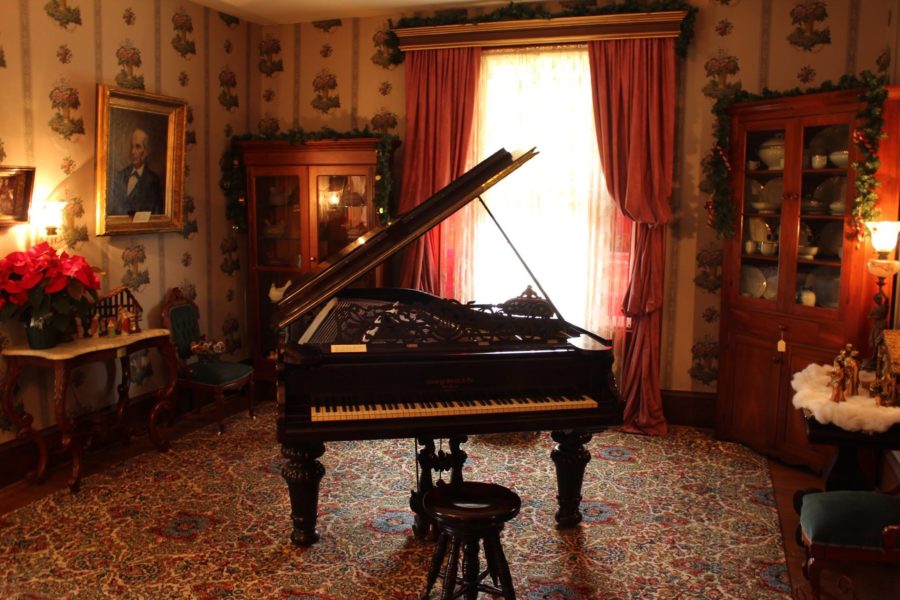 Thank you for reading The Winterset Citizen, and merry Christmas! All community announcements are provided at no charge, courtesy of the following sponsors: