Skip to content
[spacer height=”20px”]
Before it all becomes a fond and distant memory of a great weekend, just like the opening of the birthplace home back in 1982, here are a few (of many) memorable moments from the grand opening celebration of the new John Wayne Birthplace Museum.

On Friday morning, actor Barry Corbin regaled the Chamber Coffee crowd at the Chamber office while Van and Bonnie were broadcasting live at the museum. On Friday evening, Corbin said: “I was talking to a friend of mine and telling her I was coming to this event, and she wanted to come, but she had something else to do this weekend, so she couldn’t. She is sort of the foster daughter of Harry Carey Jr.; her name’s Jo Benson Montana. I told her I was going to come to this and I was going to make a donation. She said, ‘Would you make it [on behalf of] Dobe Carey?’ and I said ‘No, but I will make it to Marilyn and Harry Carey Jr.,’ so that’s what I’m going to do, right now.” Then he handed a check to Jerry Parkin. “That honors two people,” he said.

Foster Dennis, who donated John Wayne’s 1973 Pontiac Safari station wagon to the museum for display, had this to say: “I’d like to say a couple of words about Brian. It must have been about 10 years ago, I guess. I was in my office in Los Angeles and my secretary came in and said, ‘There’s this guy in the lobby. He’s from Iowa and he wants to talk to you about a John Wayne Museum.’ I said ok, send him in. So he came in, and of course he didn’t have an appointment, but that’s okay I guess… He came in, and I said, ‘You know Brian, I’m really busy, so hop in the car and you can come with me to a couple of job sites.’ So we rode around for a little while and he kept telling me about all the stuff he was going to do over here. I was looking at my watch wondering when lunch time was and I finally said to myself, ‘This guy’s crazy.’ But he did it. This guy’s a firecracker. He called me every time he was in Los Angeles to see if I was still alive and to make sure that if I died, that car would come here. Thank you very much, Brian.”

Scott Eyman, author of  John Wayne: The Life and Legend, delivered a fantastic keynote address at the ribbon cutting ceremony about John Wayne and why his body of work as a whole is so unique among other actors and significant to Americans of all ages. Also, he had this to say about Winterset on Friday evening: “As I was telling Aissa earlier, this museum, this community, everything that went into the making of the birthplace museum, is much less like a John Wayne movie, much less like a John Ford movie, and much  more like a Frank Capra movie. Winterset, to me, is like Bedford Falls. Everything that’s good about small American towns is right here. You should all be very proud of yourselves for what you’ve done for this town, for what you’ve done for this facility, which is unlike any other place devoted to any other movie star, living or dead. It’s absolutely appropriate that it be devoted to John Wayne.”

The Iowa Military Veterans’ Band performed across the street from the John Wayne Birthplace Museum plaza on Saturday, before the ribbon cutting. Toward the end of the concert, local quilters Judy Trask, Jane Reed and Jean Nolte (on behalf of the Covered Bridge Quilters’ Club) presented a Quilt of Valor to the conductor, and also announced that they had made quilts for every single member of the band, which were presented to them after the concert.

Aissa Wayne, daughter of John and Pilar Wayne, said: “I just want to say thank you to everybody who’s here and all the fans who have contributed and come to Winterset. I feel like Winterset is my second home. It’s wonderful, and the people are wonderful, and I know that my dad is looking down and saying, ‘They still love me,’ and he would be so proud.”

Despite the threat of rain, Saturday evening ended up being a beautiful night for an outdoor concert. Marty Stuart and His Fabulous Superlatives truly delivered, with the help of Stuart’s wife, Grand Ole Opry star Connie Smith. 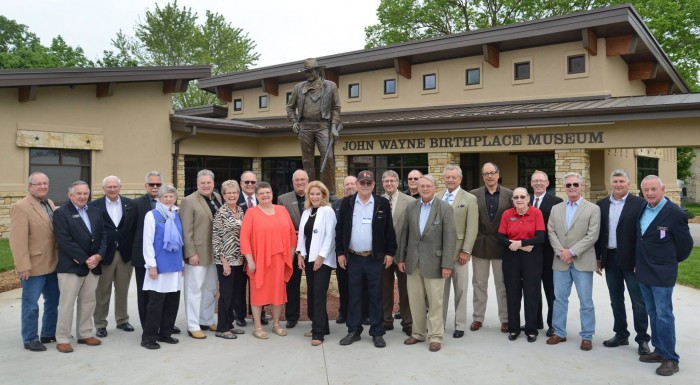 If you haven’t had a chance to see it yet, stop by on Thursday, June 4th from 5:30 to 9:00 — free admission for Madison County residents! 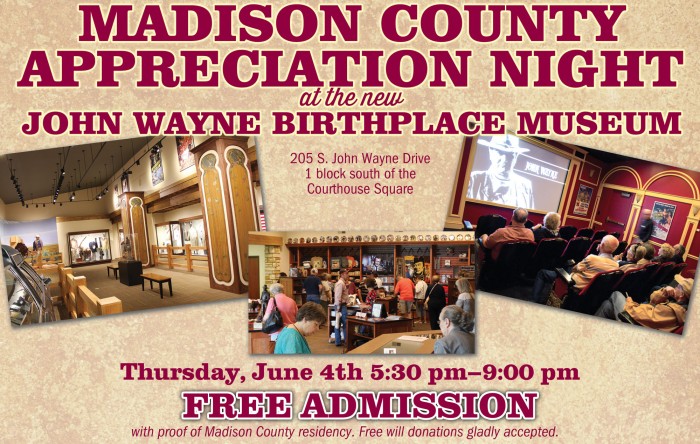