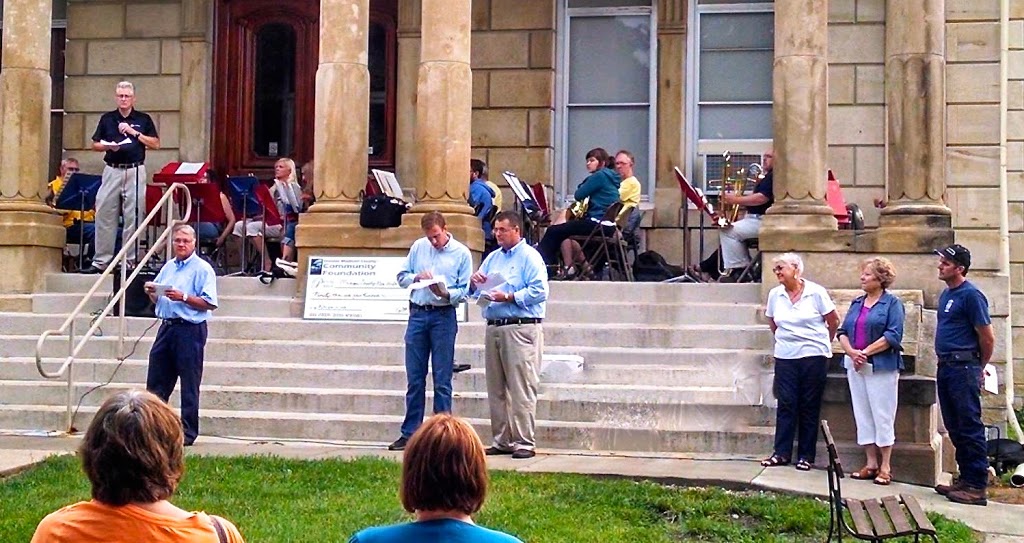 Each year, due to the fact that we don’t have a gaming license, Madison County receives a percentage of the state’s gaming tax revenue — over $100,000 per year. The funds are distributed to qualified community foundations to manage, and in our case that means the Greater Madison County Community Foundation, which is an affiliate of the Community Foundation of Greater Des Moines. Community Foundations around the state who receive these funds are charged with granting at least 75% to charitable projects within their counties each year and placing the remaining 25% in an endowment fund to attract further donations and provide a source for permanent funding for projects within the county. (I believe Madison County grants closer to 80% per year and retains 20%.) If you’ve heard about the annual Community Foundation grants or seen the ceremony where the recipients are announced on the Winterset courthouse square in June, this is what that’s all about.

Money is purposefully being parceled out to enhance the quality of life in our county, one project at a time. Our local non-profits can apply for and in some cases will receive all or partial funding for imminent ventures to make great things happen to benefit our citizens. This year there were small and large amounts awarded, from $554 to equip the Art Center with phone and wifi services, to $7,300 for the St. Charles Fire Department to purchase a used ambulance. However, there are always more funds requested than what can be granted, and some difficult choices have to be made.

The question is…. Would YOU like to have a voice in deciding who receives those grants? If so, now is your chance!

The Madison County Community Foundation is looking for board members to join them for a two or three year term, meeting approximately six times per year and on-call as needed. There are no specific requirements for board membership, but they do look for community-minded people who believe in the objectives of the foundation, and who are willing to speak up and provide input. They also look to represent a broad cross-section of the county, and a balance of ages and genders. Tom Leners, the current Administrator of the group, hinted that they could use a couple of younger voices at the table, perhaps someone with school-aged children or younger. But again, that’s not a requirement. Also, a person who has specific knowledge of (or a position within) a Madison County non-profit organization would not be precluded from participating, although it also does not enhance the likelihood of that organization receiving a grant. He or she may have to abstain from voting on a particular project due to a conflict, but because of the system they use to score them, that doesn’t hurt the overall decision-making process. “Just because they can’t vote doesn’t mean they can’t inform us. It’s vital,” Leners said. “Sometimes we’ve found things that look good on paper aren’t what we’re looking for. And sometimes things don’t read particularly strong, but if you have someone involved with that group or who knows about it first-hand, they can fill out the picture more. It turns out to be a very good process.”

The core values of the group are to give back to Madison County, foster pride in the place we call home, maintain equity in distribution of funds and integrity in operations, and lead the county in a positive direction. And to date, the Foundation has contributed a tremendous amount to the local culture. Leners explained, “It hit home this year when we did a little homework. There’s been almost $700,000 invested back in the community since we began. These groups that receive funding are the ones that are on the ground doing things for people who need help. Matura, C.R.I.S.P., Genesis, a lot of on-the-ground, practical projects to help to local people.” The Matura (Multi-Purpose Center) project, for example, is a food preparation/training kitchen to help teach people how to cook with basic commodity items, an art that some never learn at home due to the prevalence of convenience foods. It received $3,500 of a requested $11,808. He continued, “We also helped provide funding for the stage in the Lion’s Club Park in Earlham, putting a roof over it. Here in town the VFW and Legion both received funding. We funded a new basketball hoop in Truro to give them two in their park, and helped fund their storm warning siren, after they found out this spring it was either on its last leg or dead.”

Although there were 32 grants awarded this year, there were 49 applications, and very few of the 32 recipients had their projects fully funded. That means there are some tough choices to be made, and board members need to be okay with the fact that not everybody wins every year. They have a good scoring system that removes a lot of emotion from the process, but it’s still not easy to say no. “Some of those that didn’t receive funding this year were good projects,” said Leners. “We appreciate all the work people do on behalf of the citizens of Madison County.”

Aside from distributing the gambling revenue, the board is also turning its attention toward the next phase of attracting and retaining wealth throughout the county. Their endowment fund has now grown to approximately $300,000, and they’re working to build that nest egg to the point where they can start gifting out or doing other projects with it. They can also act as a receptacle for people to set up earmarked funds to support long-term projects of their own, such as what the Women’s Giving Circle has done, and they are starting to attract additional gifts, because donations to the Foundation are federally tax deductible, as well as eligible for state tax credits. Perhaps more importantly, donors know that the funds will stay in the county to be used for long-term preservation and growth.

If you are community-minded and want to contribute your voice to the Greater Madison Community Foundation for a couple of years, please consider filling out an application for a position on the board. If you have questions, contact Tom Leners at 515-462-1891 or any of the current members of the foundation. Their names and e-mails can be found here. Notice that there are two student members on the board, a junior and senior in high school, who participate as full voting members on the board. It’s a great learning experience for them, and could be for you, too! The application, which is just one page long and not intimidating, can be downloaded here. Tom assured me that it is not rocket science and does not require any background in finance. Act fast! They would like to hear from you by August 1st.